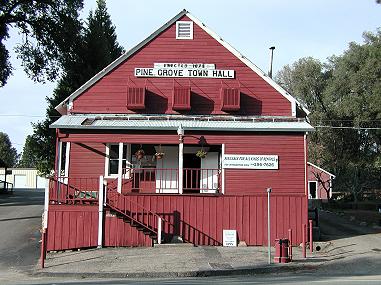 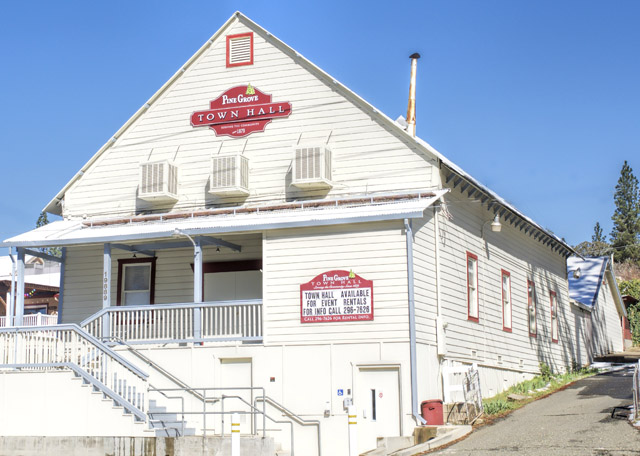 The Pine Grove Town Hall has been around since the streets were dirt and people used horses for transportation, not recreation. There is even a rumor that someone brought their horse into the Town Hall at one time.

For many years there has been a dispute as to whether the Town Hall was built in 1879 (which is on the front of the building) or 1897.

According to Historian Larry Cenotto in an article published in the Amador Dispatch Newspaper, there was a building that housed the Pine Grove Saloon in the 1850’s and 1860’s.  In 1869 it was purchased for $200.00 by L.F. Walker who then sold it to the Pine Grove Division of Sons and Daughters of Temperance for the same amount of $200.00.

By 1896, the building had been used as a meeting hall for the Temperance Group and as a Town Hall for public meetings. It was in disrepair and the foundation was crumbling. The townspeople came together under the leadership of Otis L. Webster, a blacksmith.  They began raising money by holding fundraisers such as dances and dinners.

They worked into 1897 making the improvements to the building that you still see today.  In 1907 the hall officially became the Pine Grove Town Hall.

In 1954 Adolph Galli and others incorporated the Pine Grove Civic Improvement Club.

Around 1970 indoor plumbing was added. It cost the Club almost every penny they had.  After the plumbing went in there was only five cents left in the checking account.  That is when the Bingo games started. The ladies would bake cakes and cookies and serve them along with coffee. It started out small but became so popular; they would pack the building every 4th Saturday of the month.  If you come to the Town Hall, look down.  You will see dimes in the wood floor. Those were put there to mark where the tables would go during Bingo Games. The Club had around 450 members at its heyday.  When the Jackson Rancheria opened and offered Bingo, the Club’s attendance dropped dramatically.

Pine Grove may not be anything more that a dot on a map, but we have had some important events happen here.  At 9:00 p.m. on July 14, 1984, the Olympic Torch Bearer arrived in Pine Grove.  Pine Grove also provided Governor Pete Wilson with the official Christmas tree that was placed on the grounds of the Capitol in Sacramento in November, 1996.

The Hall has been used as a place of worship, a schoolhouse, a movie house and a bingo hall and is a Red Cross Emergency Shelter. It has been rented for parties, wedding receptions, club meetings, clinics for the Health Department, a place to vote, flea market and Jazzercise.

The information provided here was taken from the History Books put together by the Pine Grove Civic Improvement Club’s Historian, Jack Dohling.  You may look at these books during Library hours at the Pine Grove Branch of the Amador County Library located in the back of the Pine Grove Town Hall.